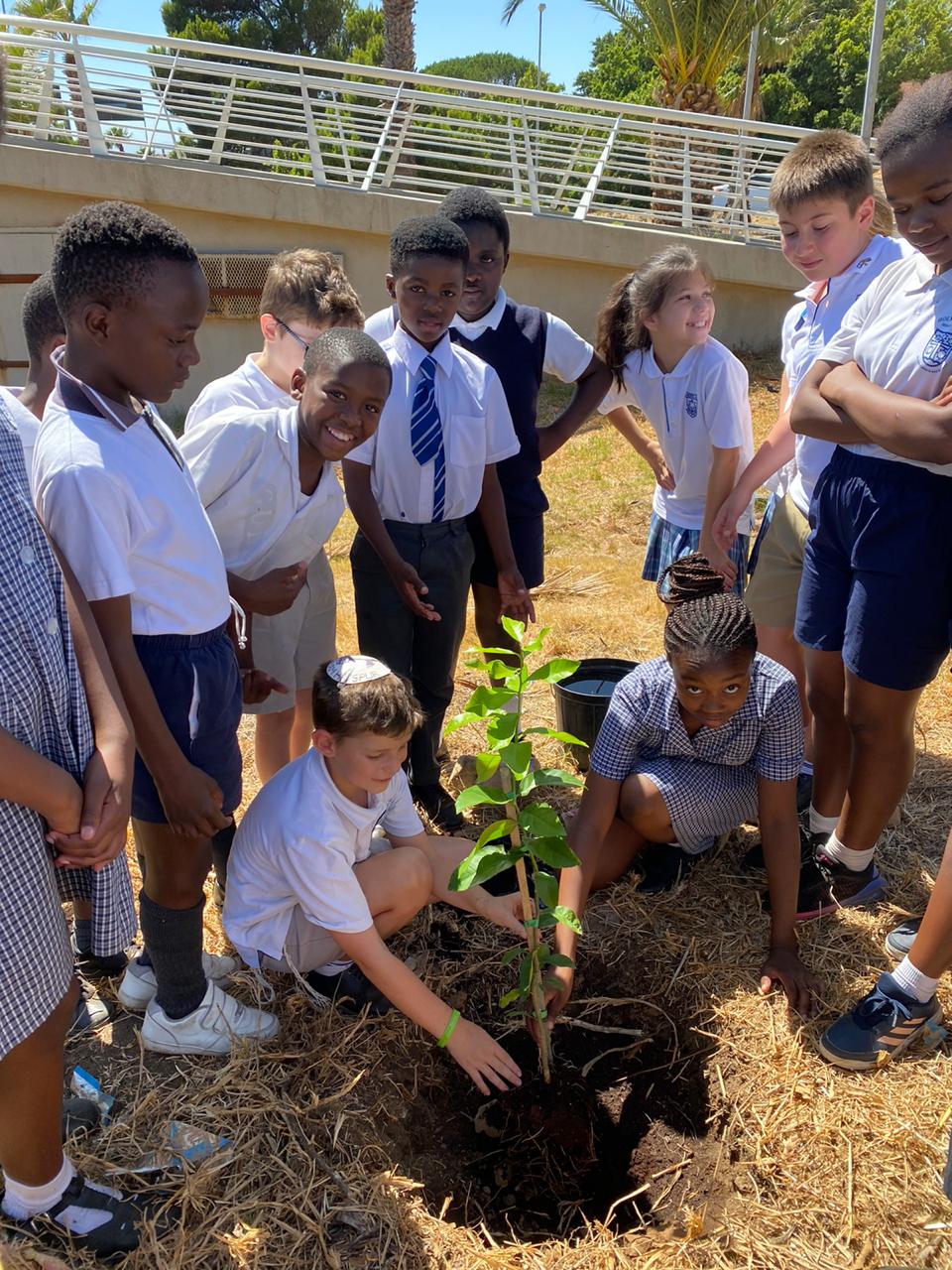 In celebration of Tu B’Shevat on Monday 10 February, the Cape South African Jewish Board of Deputies (Cape SAJBD) teamed up with Herzlia Primary’s Grade 5 class to undertake a beautification project at Holy Cross RC Primary in District Six.

Tu B’Shevat is a Jewish holiday that heralds in the blossoming trees and the beginning of the coming cycle of fruit. It is often referred to as ‘New Year for Trees’. The name derives directly from the Hebrew date, the fifteenth of Shevat. Tu stands for Hebrew letters Tet (9) and Vav (6), which adds up to 15.

The Cape SAJBD identified a need to plant trees on the grounds next to the school that principal Nomthandazo Zweni hopes to soon call their playground. Besides the school premises, the pupils of Holy Cross RC have no place to eat lunch. Pass the school at 10am on any weekday to see the pupils enjoying lunch on the sidewalk of the dead-end street between the school and church.

Cape SAJBD director Stuart Diamond addressed the congregation of around 100 Grade 5 pupils, some from Herzlia Primary, next to the future playground on Monday morning, telling them about the programme. The mix of orange and lemon trees will one day bear fruit that they can enjoy, and provide shade when they break from classes, he said.

Rabbi Emma Gottlieb shared with the children the story of Tu B’Shevat and the legend of Honi the Circle Maker. Honi was once journeying on the road and saw a man planting a carob tree. He asked the man how long it will take before this tree bears fruit, to which the reply was seventy years. He further asked the man whether he is certain he will be alive another seventy years to witness it, to which the man replied he found grown carob trees around the world as his forefathers planted for him, the way he is now planting for his children. Honi sat down to have a meal and was overcome with sleep, later dreaming that he saw a man gathering fruit from the carob tree. Honi enquired whether he was the same man who planted it, to which the man replied: “I am his grandson”. Rabbi Emma emphasised that which is done at this playground in 2020 will go on to serve future generations, and is inherently good.

Community member Delia Scott took a special interest in the school while leading reading sessions at various underprivileged schools around Cape Town. Together with principal Zweni, she has seen to various interventions at the school, including the levelling of two small fields next to the school grounds. She is currently crowdfunding the cost of fencing the grounds, planting grass or laying turf, planting trees around the perimeter and furnishing it with benches and other equipment. Anyone who is able to donate money or otherwise can get in touch with the Cape SAJBD office at sajbd2@ctjc.co.za

Photos and captions available on request.