25 Years of Our Constitution: A Jewish Perspective 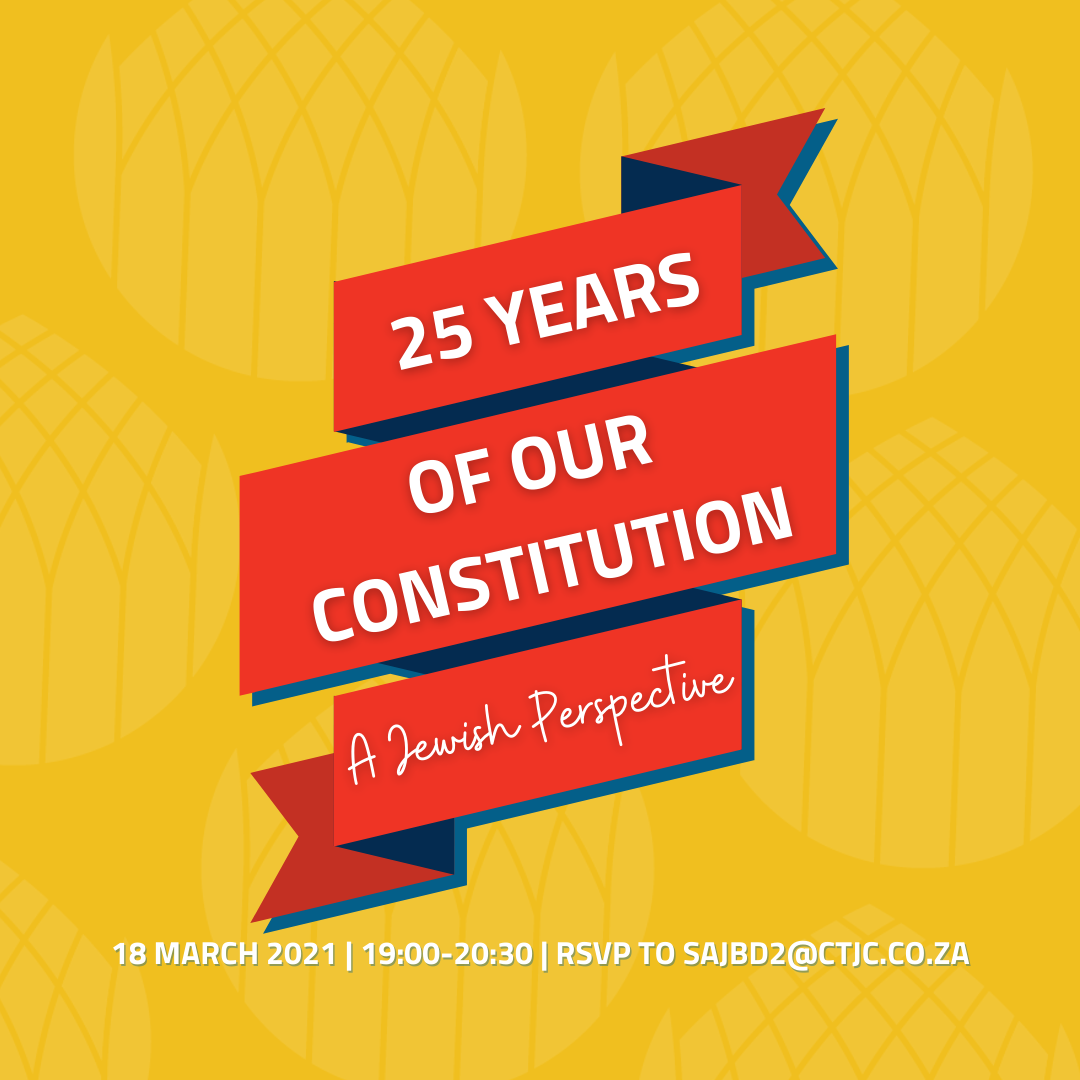 You are cordially invited to celebrate 25 Years of Our Constitution with us on Thursday 18 March at 19:00.

Get to know our panel:

Anton was schooled in Sea Point and graduated with a BSc in Mathematics and an LLB at UCT, and an LLM International/ Constitutional Law at Columbia School of Law in New York. He is a practising senior counsel at the Pan African Bar Association of South Africa, and prior to this was a member of the Cape Bar for more than 30 years. He is also a member of the New York bar and has acted ad hoc as a High Court judge. He was a member of the United Nations Human Rights Council’s Working Group on Mercenaries from 2011 to 2018 and has appeared in the Constitutional Court on more than 60occasions and has appeared as counsel in numerous national jurisdictions as well as international fora and tribunals around the world. Anton serves on many committees and board around the world, including being the Chairman of the Cape SAJBD’s Election Commission, which oversees and regulate the elections for membership of our board.

Judge Sachs was born in Johannesburg and matriculated at South African College School before completing his BA LLB at the University of Cape Town and his PhD at the University of Sussex. He practised as an advocate of the Cape Bar for five years before his exile from South Africa to England, and later Mozambique. During this time, he played a significant role in important legal issues arising in the ANC. In 1988, a bomb was placed in his car in Maputo, Mozambique, by South African security agents, due to which he lost an arm and sight in one eye. In 1990, he returned to South Africa as a member of the Constitutional Committee charged with drafting a charter for a new non-racial state and was pivotal in the inclusion of a Bill of Rights and an independent judiciary in this new Constitution.

He was appointed a justice on the first bench of the Constitutional Court of South Africa by Nelson Mandela in 1994. He has lectured at a number of tertiary institutions and published many books, including The Soft Vengeance of a Freedom Fighter, The Strange Alchemy of Life and Law, The Jail Diary of Albie Sachs (which was dramatised for the Royal Shakespeare Company and broadcast by the BBC), and We, the People. He established the Albie Sachs Constitutionalism and Rule of Law Trust (ASCAROL) to record the making of the Constitution and the Constitutional Court, digitise the information and ensure this story is accessible to learners, citizens, scholars and the broad public.

Judge Davis was educated at Herzlia School and then completed tertiary studies at the University of Cape Town and Cambridge. He was appointed a Judge of the High Court in 1998, has served as Judge of the Labour Appeal Court and, for the last 21 years, as Judge President of the Competition Appeal Court. He is an Honorary Professor of Law at UCT and is a member of the Commission of Enquiry into the Tax Structure of South Africa. He was a Technical Advisor to the Constitutional Assembly where the negotiations for South Africa’s interim and final constitutions were formulated and concluded. He has also contributed to over 150 academic articles and regularly contributes to debates in the public forum and media on issues of human rights, politics and other current issues, such as ‘Judgement Date’, a YouTube webinar hosted by Judge Davis dealing with contemporary issues in South Africa.