Antisemitism: Does the IHRA Working Definition Work for South Africa? 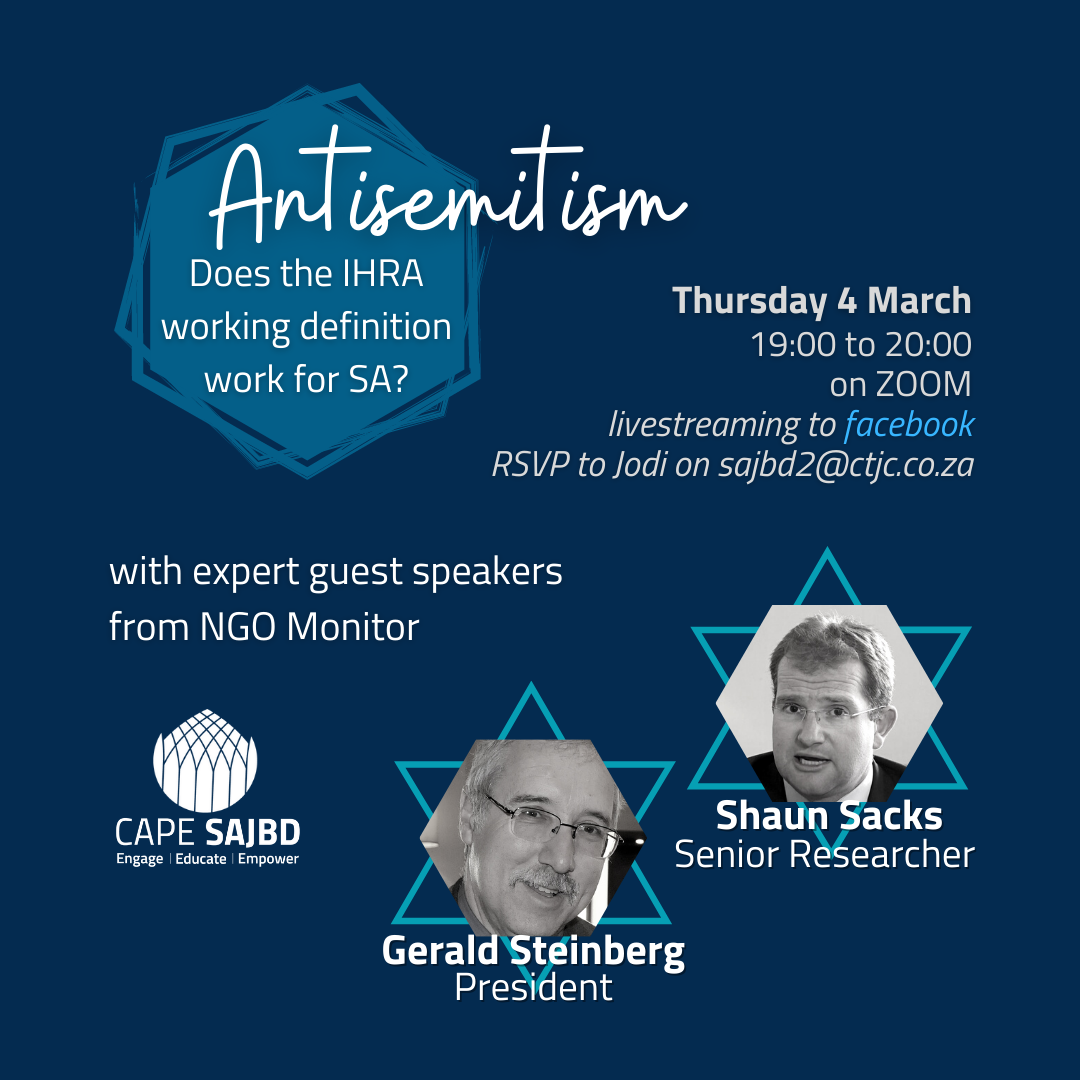 You are cordially invited to listen to experts unpack the IHRA Working Definition of Antisemitism for us on Thursday night 4 March from 19:00 to 20:00. But that’s not all they’ll do.

President Gerald Steinberg and Senior Researcher Shaun Sacks at NGO Monitor do globally-recognised work in Jerusalem promoting democratic values and good governance. NGO-Monitor.Org is the leading resource of information on political NGOs active in delegitimisation campaigns against Israel, and its work explores the roles of both government and private funders-enablers. It was founded after a need was realised at the UN World Conference Against Racism in Durban in 2001.

This is a discussion not to be missed.

Sharpen your understanding of what antisemitism is, and—
• Learn of NGO Monitor’s involvement in getting the IHRA Working Definition of Antisemitism widely accepted
• Unpack the latest trends in antisemitism
• Focus on South African groups like MRN, Africa4Palestine (BDSSA), and the SA BD Coalition
• Pick up best practices in fighting antisemitism in South Africa.

RSVP to Jodi on sajbd2@ctjc.co.za

More about our speakers

Shaun made aliya from South Africa in 1998 and received his BA from Bar Ilan University. Before joining NGO Monitor, he was the senior project manager for Netsource, an Israeli firm that specialises in providing technology employment opportunities to Ultra-Orthodox communities. He also worked as Emerging Market Manager for McAfee Inc.

Shaun’s articles and op-eds have appeared in many publications, including the Jerusalem Post and the Jewish Telegraphic Agency. Shaun has also appeared on popular Israeli TV channels, such as Ynet and Channel 20.

Professor Gerald Steinberg is the founder and president of NGO Monitor and Professor Emeritus at Bar Ilan University, where he founded the Program on Conflict Management and Negotiation. His research focuses on Middle East diplomacy and security, the politics of human rights and non-governmental organisations (NGOs), and Israeli politics and arms control.

He’s been awarded a prestigious Israel Science Foundation grant and has served as a team leader for the Israel At The Polls chapters on peace negotiations and Israel-American relations (1998-2005). Gerald was a member of the advisory board of the Israel Law Review and is a member of Israel’s Council of Foreign Affairs, and has been appointed to the Israel Higher Education Council and Committee on Public Policy. He is an academic participant in the Interparliamentary Coalition for Combating Antisemitism (ICCA), and a participating member of the Halifax International Security Forum on behalf of Israel, since 2014.

His publications include such titles as,
• NGOs, Human Rights, and Political Warfare in the Arab-Israel Conflict
• The UN, the ICJ and the Separation Barrier: War by Other Means
• Best Practices for Human Rights and Humanitarian NGO Fact-Finding (co-authored)
• Menachem Begin and the Israel-Egypt Peace Process: Between Ideology and Political Realism (co-authored)

His op-ed columns have been published in the Wall Street Journal, Financial Times, Ha’aretz, Jerusalem Post, and others. He has appeared as a commentator on BBC, CNN, MSNBC, Al Jazeera and NPR.

He is an expert on BDS, Antisemitism and Lawfare, Politics and Middle Eastern Affairs, Israel-American and Israel-European Relations, and NGOs and Foreign Funding.