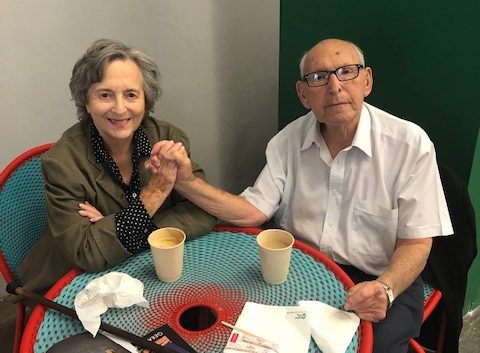 This special personal narrative was shared with the Cape SAJBD ahead of Workers’ Day 2020, when trade unionists and political activists Leon and Lorna Levy will celebrate 58 years of marriage, purposefully choosing May Day as their wedding date all those years ago. Mazel Tov on your anniversary.

On 1 May 2020, Leon and Lorna Levy will have been married for 58 years. When they married in Johannesburg in 1962, Leon Levy was President of the South African Congress of Trade Unionists and Lorna Levy was Assistant Secretary of the National Union of Distributive Workers.

It was Lorna who decided that the date to get married should be on 1 May, Labour Day. Today, it may sound rather corny that two trade unionists chose that day for their marriage — but it didn’t appear that way at the time.

“We had two celebrations on that day because it was how South Africa was at that time. First there was the conventional family luncheon held in an up-market venue. We made this a family-only occasion because of the limitations on who could attend an event like this, due to all the race restrictions of the time.

In the evening, we held a huge party in Michael Harmel’s house for the political movement, our friends. It had professional catering and alcohol available, although this was forbidden. In fact, it was unlikely that a party of ours was legal at all, so much so that the Special Branch arrived outside in a number of cars, but luckily, they did not come into the venue. Their presence was noted by all our guests.

It was 1 May 1962, and there was really a roll call of the political movement present at our wedding party. Among our guests were Winnie Mandela, Walter Sisulu, Ruth First, Joe Slovo, Ahmed Kathrada, Moses Kotane, Hilda and Rusty Bernstein, and so on. It was very a crowded event.

It was a time when we liked to party and our wedding was an occasion for people across the colour line to meet. An event like our wedding that May Day 1962 was rare. Soon afterwards the changed legislation would have made that wedding party impossible.”

A year later, and the Levys’ lives had changed. On May Day 1963, Leon was in prison, detained under the 90-day detention law, and Lorna was in London, living in exile. Over the years, lots of people have remembered that party, the wedding celebration in Orchards, Johannesburg that was the last big non-racial event of an era.